Oh my goodness. The Class of 2020 isn’t getting a graduation ceremony. No caps and gowns, no processing into a giant, over-air conditioned auditorium or athletic stadium, no beribboned diplomas handed over, no caps thrown. The media stories I have heard about this terrible tragedy, and the makeshift Zoom parties and the like taking place in its stead, seem endless.

I have news for the 2020 graduates, whether they’ve just completed kindergarten or are finally earned their Ph.D.s: You’re going to survive—assuming you survive the coronavirus, the cause of the smaller tragedy. 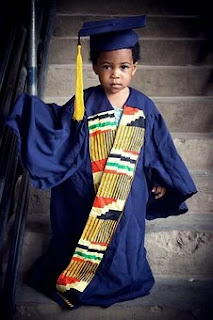 I know this to be true because I have never graduated, despite having completed a good deal of schooling. I’ve never walked across a stage and accepted a sheepskin in my life. Nope. Not even after completing kindergarten.

And yet here I am, by all accounts a fairly successful human being, psychologically sound, undamaged at my depths by this dearth of commencement exercises.

The reasons for this curious situation are many. One, I lived in a time before completion of kindergarten warranted a graduation ceremony. One simply went on to the first grade. Likewise I remember no ceremony for completion of elementary or junior high school (this was before the creation of “middle school.” Yes, I’m that old).

High school was a different circumstance. The summer I turned 16, we moved from Fort Worth, Texas, to El Paso, Texas. I was entering my junior year of high school in a strange town just after a car accident in which my face met the windshield of a '56 Chevy at 60 miles an hour. I had a very big, very ugly facial scar and spent a good part of that year getting two rounds of plastic surgery to improve upon it. I was forced to wear a giant straw hat everywhere to shield my tender new skin from the powerful desert sun. I felt not just like an outsider, but an ugly outsider at that. My goal was simply to get through school as fast as I could and, like all kids of that era, get the hell out of my parents’ house.

By going to summer school, I managed to complete my academic requirements by December of my senior year. I found a boyfriend who was already in his early 20s and a bunch of hippie friends at a charismatic Christian church, and I was done with the whole school scene. I had no school friends with whom I could have partied after graduation, had I chosen to go through the May ceremony, which I was told was an option. No, thank you. I was on the road out of El Paso and registered for college at the University of North Texas practically before Santa got back to the North Pole. 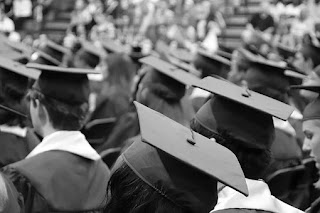 Oddly, the same situation recurred when I completed my bachelor’s degree. It took me five years to finish my degree. Probably changing my major five times slowed me down a bit. As did working part-time all the way through. Anyway, I once again finished my coursework in the graduation “off-season”—December—and took off with my then-boyfriend to go on a European tour for three months. I think we got back in enough time for me to go through the graduation ceremonies, but I couldn’t imagine why I’d want to sit in a folding metal chair wearing a black synthetic gown in the Super Pit basketball arena along with 700 or so other sweaty folks for four hours. I already had a full-time job at a medical school and a part-time waitressing job at night in Fort Worth. I was living in the real world, making money, getting a leg up on life. I had already commenced.

There is one exception—sort of—to my practice of not commencing. About 25 years after finishing my master’s degree I participated in a ceremony marking my ordination as a minister. No diplomas were handed out, although there was a laying on of hands by all of the participants, so that we seven who were being ordained were surrounded by ever-increasing roughly concentric circles of folks, each with their hands on the person in front of them so the blessing could travel. The feeling-tone of that event was not at all akin to an academic graduation. I was feted at a very lovely reception at my own home, but it was nothing like a graduation-night party, or what I imagine them to be like, anyway.

Do I feel cheated by my lack of happy memories of graduations? Actually, no. Beside the non-events of kindergarten and junior high, the other instances in which I missed graduation ceremonies were my choice. And of course now I can see they were also a rejection of societal expectations. I never wanted to live an “ordinary” life, so why would I participate in such things? I was a snob; I held our cultural mores and rituals in contempt. I’m not such a snob about these things now, but I understand the young woman I was and how she became that way.

I was not connected in a deep way to my high school peers, or to my collegiate ones. I was too busy working and studying and trying on new identities to form those kinds of lasting relationships. And none of my college friends—at least that I can recall—was graduating at the same time I was. They’d already finished or were still in school, plodding along. I didn’t really have a cohort.

Nowadays, I’m jealous not of those who went through graduation ceremonies, but of the relationships that they built and have maintained over the years. Oh, sure, I have the phone numbers of one or two of the people I went to college with, but not a single one for high school friends, and I am not connected to any of the college pals in a meaningful way. Participation in a graduation ceremony wouldn’t have altered that today. 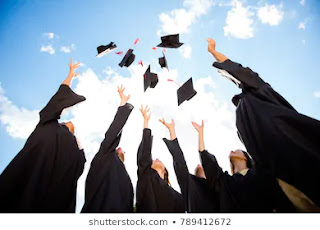 There is more to that personal issue, obviously, but the point is the young generation that is not experiencing the classic ceremony and its accoutrements are not going to be irreparably psychologically damaged. I suspect it’s more difficult for their parents, who are missing the ritual of watching their babies “commence” into adulthood—or hoping they are—and missing revisiting their own graduations.

Likely many of these “uncommenced” young adults are back at home with mom and dad, given the coronavirus and its impact on employment. Another, perhaps more significant, real commencement will take place when a vaccine is widely available, the economy really re-starts, and those young people can truly begin their independent adult lives.

*My sister informed me after reading this online that I did indeed graduate from junior high, and that she might even be able to find a picture to prove it. But since I don't remember it, does it matter?

**Please note: If you have left a comment and I have not responded, or it hasn't shown up here, it's because the comments have been disappearing into my spam file. I think I have solved that problem and promise to post your comments in the future!